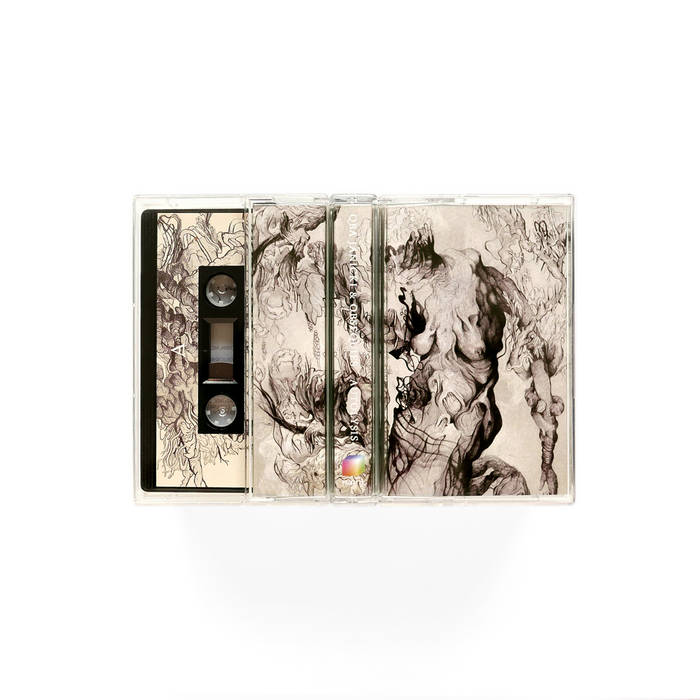 Autolysis by Obsequies and Qba Janicki is a unique synthesis of detailed digital live sound sculpting with processed and amplified analogue percussion motorics, formed into improvised dialogues and polished using advanced arrangement and production techniques.
The outcome is a massively sounding versatile world of structures, driven by an unpredictable style of improvisation and composition. Polyrhythmic and amorphous entities play along with layered explosions, unveiling different universes with each breath those two take while improvising, simultaneously. An electro-acoustic sound organism, which consumes its own flesh for the purpose of self-regeneration.

Music by Music by Obsequies and Qba Janicki
Recorded in Recorded in CSW U-Jazdowski, Sokołowsko Laboratorium Kultury and Beursschouwburg 2018/2019
Mastering by Nagy Roland / www.facebook.com/faustomercier
Artwork and design by Obsequies / www.instagram.com/sadobsequeen

The meeting of Obsequies and Qba Janicki was inititated by Avant Art's Foundation AiR Warsaw programme. Further cooperation was supported by Laboratorium Kultury Sokołowsko and Beursschouwburg Brussels. Thanks to all the partners for letting us work in comfortable conditions and making this recording happen.

Obsequies - With an obsession for perverted beauty, Obsequies acts as an intermediary between intimacy and intimidation. While the gentle, minimalist piano tries to find a way out of a whirling, suffocative mass of noise, ethereal voices resound through silence, awaiting for the blast of ephemeral scattering beats.
soundcloud.com/obsequies
www.facebook.com/Obsequies-487067435013250

Qba Janicki, born on 6 February 1989 in Bydgoszcz, Poland, currently lives in Sokołowsko. He was influenced by the artistic society gathered around the famous club MÓZG. Over the last 15 years, he has performed hundreds of concerts, sharing the stage with the likes of Jerzy Mazzoll, Sławek Janicki, Roscoe Mitchell, Tomasz Sroczyński, Toshinori Kondo, Peter Brotzmann, Kris Wanders or Fred Frith. He currently plays in various ensembles, including Malediwy (with Marek Pospieszalski), Kondensator Przepływu (with Bartłomiej Chmara and
Martyna Chojnacka), Wojtek Mazolewski Quintet, YO NELLY! (with Steven Buchanan) and recently established duos with composer Teoniki Rożynek and Belgian producer Obsequies.
Besides playing instruments, he also composes music for theatre, working with Maciej Podstawny, Paweł Łysak, Artur Pałyga and Grzegorz Jaremko. He also made an appearance on the hip hop stage, producing Hore, an album by legendary rapper Vienio of one of the first Polish hip hop groups Molesta. In addition, as co-founder of the MÓZG Foundation, he organizes cultural events in Bydgoszcz and Warsaw.
soundcloud.com/qbajanicki
www.facebook.com/qbajanickiartist

Founded in Warsaw in 2015, Pointless Geometry is an independent label that specialises in tape releases of experimental electronic, electroacoustic and dance-esque music as well as audiovisual projects on VHS tapes.

Bandcamp Daily  your guide to the world of Bandcamp

Cannibal Corpse's George "Corpsegrinder" Fisher stops by for an interview